An evening with Isabella Rossellini 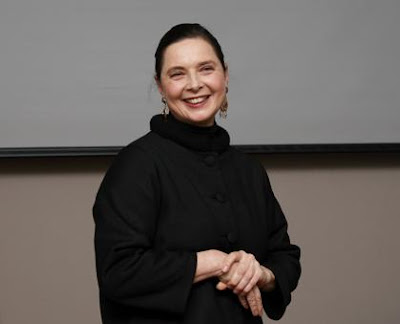 Humor, charm, and creativity best describe the entire evening last night with model, actress, and director, Isabella Rossellini who was in Seattle for a special engagement with Seattle Arts and Lectures.

The evening included a little family history, bits of her other works, and a good portion of her project with the Sundance Channel, Green Porno in which she reimagines the timeless tale of 'the birds and the bees' in her award-winning short film series on the sexual behaviors of animals. Now in its third season, Ms. Rossellini has evolved the shorts to include key challenges facing some of the species that star in each episode. From earthworms and elephant seals to spiders and squid, Ms. Rossellini reenacts sexual strategies of many a species with humor, emotion, and a great sense of wonder for the animal kingdom. I did get to meet Ms. Rossellini very briefly at the post-lecture reception which was a dream come true for an animal behavior and sustainable style guy like myself.