His Holiness, the 14th Dalai Lama 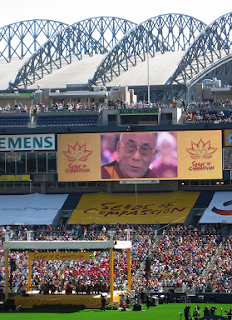 Today, I had the great honor of attending an event featuring His Holiness, the 14th Dalai Lama. His several day visit to Seattle was part of Seeds of Compassion, a five day event engaging Seattle communities in the idea of peace and compassion.

My day started at the UNICEF booth. I've volunteered with UNICEF for over 10 years here in Seattle so it was a again a great honor to help out during this event. My shift was over just in time to go see the opening ceremonies of the Dalai Lama's event. There were many speakers and an inspiring drum session in which the local Duwamish people took part. The Dalai Lama's speech was incredible, inspiring, and - as is often the case - quite humorous. The wise words and laughter were very well received by the audience that almost filled Quest Field, home of the Seattle Seahawks.

In 1997 I took part in an Earthwatch trip to Ladakh (an area of India that is culturally very Tibetan) where we studied the biology and culture surrounding snow leopards. I had the opportunity to visit several Tibetan Buddhist monasteries while in Ladakh and remembering the beautiful landscape and people still inspires me today. It is events like this that reaffirm the culture is a vital part of our lives and will indeed continue to shape our future along with innovative science and design.